Qatar's foreign minister is due to visit Beirut on July 20. 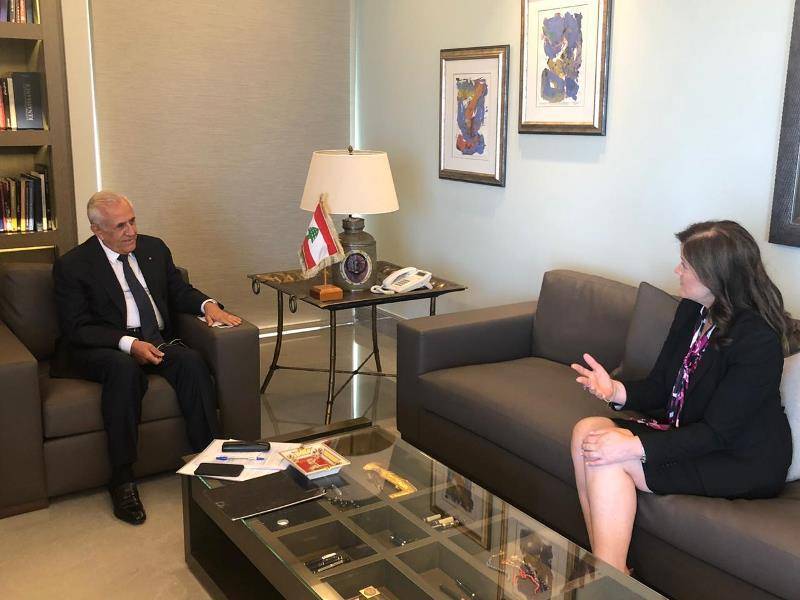 What can we expect from the visit to Kuwait by the Public Security's director general, Major General Abbas Ibrahim, in search of help for Lebanon, which is going through the worst eco-nomic and political crisis of its modern history? Upon his return Monday, Ibrahim informed President Michel Aoun of the details of his meetings, undertaken at the latter's request. How-ever, according to concordant sources, Abbas’ visit is not to change the donors’ position. Both Arabs and Westerners are waiting for the Lebanese government to implement economic and political reforms required to unblock aid promised to the country.

It is this message that Kuwaiti officials reportedly conveyed to Ibrahim who met with them in his capacity as emissary of the head of state. According to OLJ informant Mounir Rabih, the Kuwaitis have expressed readiness to help Lebanon in order to avoid famine and total collapse. But so far, no official decision has been made to provide financial assistance to Lebanon. This option remains linked to reforms that the cabinet should implement as soon as possible and to efforts confirming Lebanon's neutrality and distancing it from the region's conflicts. For more than two weeks now, Maronite Patriarch, Cardinal Bechara el-Rahi has been tirelessly calling for “neutrality” to overcome the country’s national crisis.

However, an informed source said that Kuwait may allow its citizens to travel to Lebanon start-ing end of July.

According to Rabih, Qatari Foreign Minister Mohammed bin Abdulrahman Al Thani is also ex-pected in Beirut, initially on July 20, to meet with Aoun, Parliament Speaker Nabih Berri and Prime Minister Hassan Diab. His meetings in Beirut should also follow a visit by Ibrahim to Do-ha. Like the Kuwaitis, the Qataris do not seem willing to provide financial assistance to Lebanon until a formal reform process is put on track. They, however, may support some schools and help families in need.

The Qatari minister's visit may coincide with that of his French counterpart Jean-Yves Le Drian, who is due in Beirut next week. Speaking at the Senate Foreign Affairs Committee on July 8, Le Drian announced that he would be visiting Beirut and addressed the Lebanese authorities by saying: "Help us help you, For God's sake!” An informed source told L'Orient-Le Jour that the French official is expected to urge Lebanese top officials to carry out economic reforms, espe-cially within the electricity sector, and political reforms, by opting for Lebanon's neutrality with regard to the conflicts in the region.

Italian officials have also emphasized the need that Lebanon responds favorably to the interna-tional community's demands. That’s what Lebanese Foreign Minister Nassif Hitti heard from the officials he met during a visit to Rome last week.

A diplomatic source said the economic recovery plan drawn up by the Diab cabinet impressed the Italian officials. But they are waiting for action, stressing, again, that no one can help Leba-non if it doesn’t make efforts for its recovery. The Lebanese authorities, they said, should fulfill their responsibilities in this regard.

Lebanese Ambassador to Rome Mira Daher said Hitti's visit to Italy was "very successful." In an interview with L'OLJ, she explained that Rome was ready to help Lebanon in all respects, includ-ing economic recovery and military assistance. "Discussions on this are underway between the defense ministries in Lebanon and Italy," Daher said.

For her part, US Ambassador Dorothea Shea continued her contacts and meetings. She met Monday with former President Michel Suleiman. Their talks reportedly focused on Lebanon's neutrality and economic recovery.

What can we expect from the visit to Kuwait by the Public Security's director general, Major General Abbas Ibrahim, in search of help for Lebanon, which is going through the worst eco-nomic and political crisis of its modern history? Upon his return Monday, Ibrahim informed President Michel Aoun of the details of his meetings, undertaken at the latter's request. How-ever, according to concordant...

Nothing to Expect before a Broader Political Agreement

Were Illegal Weapons Used against the Demonstrators on Saturday in Beirut?

"Help Us Oust the Ruling Class," Lebanese Appeal to Macron in Gemmayzeh

Dear reader, in order for your comments to be published, we suggest that you check our community rules.