The icon of the Lebanese revolution

With one kick, Malak Alaywe Herz became a powerful symbol of the Lebanese uprising. Both reserved and rebellious, she shies away from the limelight and prefers to speak in the plural as opposed to the “I”.

Marwan CHAHINE | OLJ
Malak Alaywe Herz is slender with a soft look despite the dark circles around her eyes. She pauses and offers a wide, shy smile at the end of each sentence. Her voice is hoarse. She has a huge bruise on her right calf. And when tears of emotion and fatigue run down her cheeks, she doesn’t try to hide them. But she is not a small or fragile woman. Malak is on edge, but she is strong. Very strong.

Last Thursday night, she delivered the now infamous kick that became the symbol of Lebanon’s revolution. She hit the bullseye, striking straight at the heart of machismo and evilness. Along with the groin of the unfortunate bodyguard, she unsettled the whole oligarchic, corrupt and patriarchal political system.

The scene is both chaotic and clear: at night, a mob gathers in front of an official building. A man in a black t-shirt, presumably a bodyguard, holds a Kalashnikov in his hand and walks up to a young woman in a tank top … She kicks him in the groin, forcing him to move back several meters.

The video has been shared hundreds of times around the world, gaining momentum like a snowball rolling downhill. The image has multiplied and is now available in multiple versions: as the official logo on posters calling people to demonstrate, in stencils on the walls of the city, in social media profile pictures. Soon too, it will be on the bodies of some posters who are thinking of having the image tattooed on their skin to immortalize the moment that made them shiver with rage.

Malak is now standing on the edge of Riad el-Solh square, where she has been for a week. “We were a small group,” she says. “[The Minister of Education’s bodyguard] walked towards us and started shooting in the air. I told him to fire at me. He kept moving forward, and in order to free myself, I hit him without thinking.” She pauses, and then resumes in a shaky voice: "It might have been better had he killed me. It would have been really symbolic. This is the only way for things to change.”

"This is a Non-Functioning Country"

Malak, who declines to mention her age, but was born during the war, wants things to change on a deep level because, “this is a non-functioning country,” she says. A few hours before her confrontation with the bodyguard, she had joined a rally in Martyrs’ Square with a handful of relatives and activists. The demonstration wasn’t specifically about the WhatsApp tax, but more of an expression of general discontent. And Malak thought that, as usual, at best a few dozen people would show up. She never imagined that, a week later, half the country would be on the streets.

Describing the movement taking place and naming the cities that have feverishly joined in, Malak sheds a few tears of joy. But she immediately puts herself back together, as if out of superstition: she does not want to cry victory too soon, as if she is afraid the dream might turn into a nightmare. Full of determination, she says: “The revolution has to triumph. We have no choice!”

Malak is not just uttering cliches. She is well acquainted with deprivation and challenges. Despite holding diplomas in both banking and sociology, she hasn’t been able to find a job for several years. "I have no wasta (nepotistic connections)," she says with a shrug. So she gave up: "What's the use of killing myself in order to only earn $600. This isn’t enough to make a living.”

She was also frustrated while looking for an apartment in Beirut a few months ago. The only units she could find were overpriced, giving her no choice but to move to Aley, on the outskirts of Beirut. Her story should strike a chord with anyone who wants to reduce the revolt to some liberal demands: her frustration in not just due to recent events.

For a long time, a hopeless anger has been buried inside of Malak, who is originally from Mayss al-Jabal, a village in the extreme south of Lebanon. But two events helped her gain faith in politics: the 2015 movement against the garbage crisis, which brought together tens of thousands of people, and meeting Mohammad, a tall activist with the voice of a tenor who doesn’t miss a single demonstration.

Mohammad is an independent radical and doesn’t belong to any political party or association. With a bandage on his forehead and wide scars on his neck, he looks every bit the part of a revolutionary. "His body bears the marks of his convictions," Malak says with pride.

Their love seems as great as their faith in the cause. Two months ago, Malak said yes to Mohammad’s marriage proposal, a piece of news that might break the hearts of many admirers who have asked for Malak’s hand on social media. If they could, the lovebirds would have had a civil marriage, but there is no law in Lebanon authorizing this kind of union. And due to a lack of means, they couldn’t organize a proper party.

Last night, they made up for it in front of the Serail with a guest list that, yesterday afternoon, they hoped would be close to a million people. Between one question and the next, Malak was wondering how she would be able to get a bridal veil.

Malak has become an icon, but she does not want to attract the limelight and tries to avoid journalists. Finding her and convincing her to speak with L’Orient-Le Jour was a challenge. In a country known for its self-promotion and selfie taking, Malak’s desire for discretion stands out. Here again, it is not difficult to see in her a symbol of a changing of an era.

Against self-centeredness, which is often a cover-up for deep emptiness, Malak and her family speak of the collective “us”, which goes beyond one person, confession or social class. They speak of an “us” that, until a few days ago, didn’t dare to believe in Lebanon. Proof of the changes already underway, one feels more embarrassed asking her about her religious faith than about her age. She says that she is Muslim and insists, placing her hand on her heart, that religion is a personal matter.

Malak knows that her kick is no longer hers alone: it belongs, now, to all the Lebanese who, just like her, believe in change. Her act is full of symbolism: the fact the she is a woman, that she is young, that she fights with her bare hands, that she is not afraid and the fact that “he” stepped back.

Proudly, Malak utters two statements that could be used as revolutionary rules: First, one must never give up hope; the strong is not always strong, and above and beyond that, whoever believes they are the strongest is in fact the weakest. Second, militiamen, "abadayets" (thugs) and bodyguards no longer own this moment; it does not belong to all those who have always made the rule of law in Lebanon, which is the law of the jungle. In other words, she says that now is the time for civilians, for citizens of both genders, and especially women, and it is up to both of them to write their future together.

Malak’s kick would probably not have become legendary if it had not had such great aesthetic power. Gregory Buchakjian, an art historian who teaches at ALBA, says that there is a rich iconography of women fighting against oppression in painting and photography and that this image is part of that continuity.

"Some have seen a new Marianne, but it would be closer to Freedom guiding the people of Eugene Delacroix or even Judith decapitating Holofernes of the Italian painter Artemisia Gentileschi," he says. "In the contemporary press photo, the theme of the woman facing soldiers is recurrent, as in Marc Riboud's La jeune fille à la fleur. The fundamental difference is that this time, the woman is defending herself, which makes her a wonderful feminist symbol.”

According to Buchakjian, on a more technical level, the perfect right angle of the kick reinforces the iconic dimension. But, he says, the angle is less clear in the video than in the images that have been drawn afterwards, including Rami Kanso’s illustration (see opposite) and Noemie Honein’s.

The beauty of the gesture could almost make the viewer forget that it is a kick, according to Steven Majdalani, who teaches martial arts in Beirut. Majdalani says that it was a well executed kicked, but could have been even more powerful if it included a step forward. He also adds that hitting one’s opponent in the genitals is strictly prohibited in a competition, but can be acceptable, or even required, in extreme circumstances of self defense, such as Malak’s. "This episode proves that martial arts are effective and should encourage everyone to practice it," he concludes.

Majdalani does not know that Malak has never practiced combat sports and that she reacted spontaneously, inspired by action movies she loves, especially ones with female heroines.

For the picture of this story to be complete and accurate it would need to include the testimony of the ‘loser’ of the altercation: t he bodyguard to whom we wish a speedy recovery. Malak does not blame him. She knows all too well that he is not the core of the issue.

All over the country, protesters are starting to dream that this man is not the only victim of this whole affair and that, by some miracle, the corrupt politicians, whose bodies have been protected for too long, will also feel, in the depths of their beings, the power of this blow given to them by a whole population: a kick that bears the name ‘thawra’ (revolution). 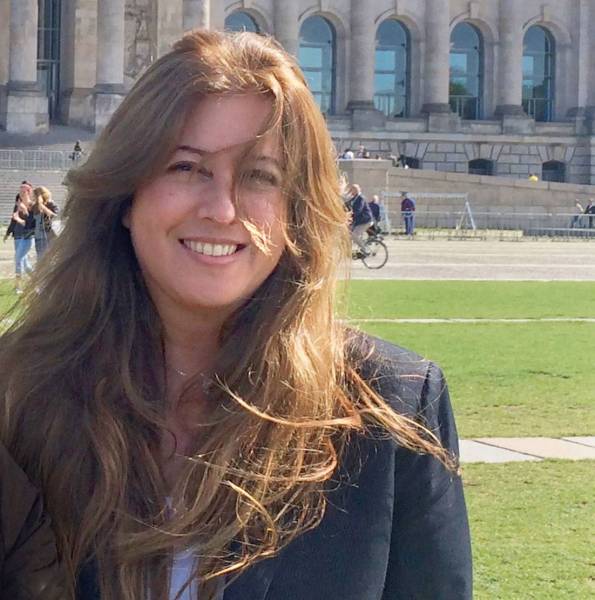