Many protesters, especially young people, believe that after three months, the peaceful option has not achieved the movement’s goals.

Jeanine JALKH , with , Rita BASSIL | OLJ
The display of extreme violence in downtown Beirut over the weekend made it clear that the protest movement has moved into high gear, with several groups opting for escalation.

The scenes of urban clashes and nightly violent episodes during the rallies last weekend, which had started peacefully, only confirmed the cleavage that now exists within the protest movement around the means available to exerting protesters in order to bring down the political power in place.

For some, the various failures of the political class that have been ongoing for more than three months now in the face of popular demands, and their insistence on repeating old patterns denounced by the streets since the beginning of the revolt, can only be remedied to by a well-proportioned escalation, the peaceful option having generated no results to date.

Others, however, continue to preach the virtues of a peaceful civic movement that they believe to be more persuasive and more effective in the short and long term, even if to date it has only gained meager results in terms of rotation and change in the ruling elite.

"We have nothing more left to lose. Our dignity is worth much more than a life which has become over saturated with humiliation and deprivation”. It is through this leitmotiv, which brings to mind the slogans shouted during the Ukrainian revolution of 2013-2014, that an increasing number of protesters - young people mainly-, justify their slide towards violence.

For several weeks, the debate in closed circles and on social media has been quite heated and fierce. This debate is taking place between a generation boiling with restlessness, taken over by frustration and weariness with the deaf ear of political leaders - who have once again made a shameless display of their internal strife and their maneuvers intended to secure their political reappointment at all costs -, and more toned down groups which, -without disapproving of the possibility for radicalism -, continue to hold a more moderate position, clearly the first group seems to be getting the upper hand .

"Radicalism is the ruling class’ option, not ours. We are being subjected to violence", says Sana, an activist who at some point campaigned within the ranks of the Democratic Left. "When we are increasingly sinking into precariousness and have a mafia in power, the pent up violence will inevitably end up exploding”, she explains.

While for some, resorting to violence is a reaction to their frustration and discontent, others look at these latest steps as conscious choice and a more effective deterrent option.

"When there is no reaction on the part of the political power, mixed with a failure to acknowledge the protest movement and its demands, this provokes in those who are the most affected a slide towards the negation and the contestation of the legitimacy of the institutions and of the power in place", points out the leader of the Muwatinun wa muwatinat party, Sharbel Nahas to L'Orient-Le Jour.

More targeted at the onset, the escalation was mainly aimed at the banking sector, the ultimate symbol of the impoverishment of people and the site of the humiliation they have been enduring for merely attempting to access their money.

"Some people channel this violence because they are ideologically convinced that the economic symbol of money ought to be attacked. Others close to Hezbollah are reacting against the banks which they accuse of applying the American plan which, through financial measures, consists of undermining the party", comments Tanios Deaibes, an activist and former journalist.

Attributed mainly to thugs from circles close to Hezbollah and Amal, as well as to certain circles from the Left whose ideology convinces them of the effectiveness of resorting to a more violent form of protest, the ransacking within the grounds of the Bank of Lebanon was also attributed to young people considered to be politically independent.

"Often, protesters who see others vandalizing or resorting to violence get enthusiastic and decide to take action themselves. It becomes somewhat contagious”, says Halima Kaakur, an activist who suggests that radicalization is no longer the monopoly of a specific group, let alone the actions of a few gangs of infiltrators.

A diversification of targets

The incidents on Saturday night in front of one of the entrances to the Parliament spread to other areas of downtown Beirut and proved that banks are no longer the only focus of the thugs; so are the institutions considered to be the “backbone of the system from which we have been suffering psychological and social violence”, as Elham, a leftist militant, points out.

While avoiding judgment or condemnation of the new direction that a part of the protest movement seems to be taking, - the protagonists of that movement who in the first weeks of the revolt, bragged about its peaceful and unifying character-, several groups of activists continue to defend their initial choice, and are trying to calm the ranks of the youngest members of the crowd, but without much success.

The talk about the risk of generalized chaos or a potential civil war no longer echoes with the new generation which believes neither in the lines of demarcation -which were prevalent through the 1970s-, nor in a potential sectarian confrontation, neither of which they relate to.

"No one can tell them what they can or cannot do. We have no authority over them”, said a militant lawyer. During discussions that took place after the first few signs of radicalization, the youngest members of the movement were intractable when it came down to exploring the idea of guidelines or of a steering committee in regards to the movement, or even the option to give up the use of violence.

"You should have made your revolution in your days, but you missed the boat. So let us make ours. After all, you are the ones who voted for this political class”, says the lawyer, summing up the views of some of the young protesters.

Without any parameters or any precise directives, but nevertheless with a platform of clear and common demands, starting with the formation of a government comprising only of honest and independent members, the revolt seems to progress and evolve around the mood of its eclectic mix of members, at the risk of radicalization taking control of the movement.

"Today, there is a tendency for the" hirak " (revolutionary movement) to marginalize or even to eliminate those who oppose the use of violence. Everyone considers themselves free to speak out as they wish", said Pierre el-Khoury, a former member of Beirut Madinati, and currently a member of the progressive group Aan haqqak dafeh (Defend Your Rights)

For some intellectuals, this is not the time for judgment or denunciation, but rather for solutions to put an end to violence which, for the time being, remains "controlled and targeted". "It is not a question of condemning, but of looking at vandalism as one form -among many others- of expression, of understanding it in order to undo it", comments Mr. Deaibes, who highlighted the reasons behind this violence, including the context of social and economic injustice.

While expressing her compassion for a youth in turmoil, and that suffers on a daily basis, Halima Kaakur continues to speak in favor of the peaceful option. In order to validate her preferred choice, the activist quotes research carried out in the United States in 2014, according to which, from a sample of 323 political campaigns around the world, 53% of those who opted for peaceful methods were successful, compared with only 23% for those which slid into violence. 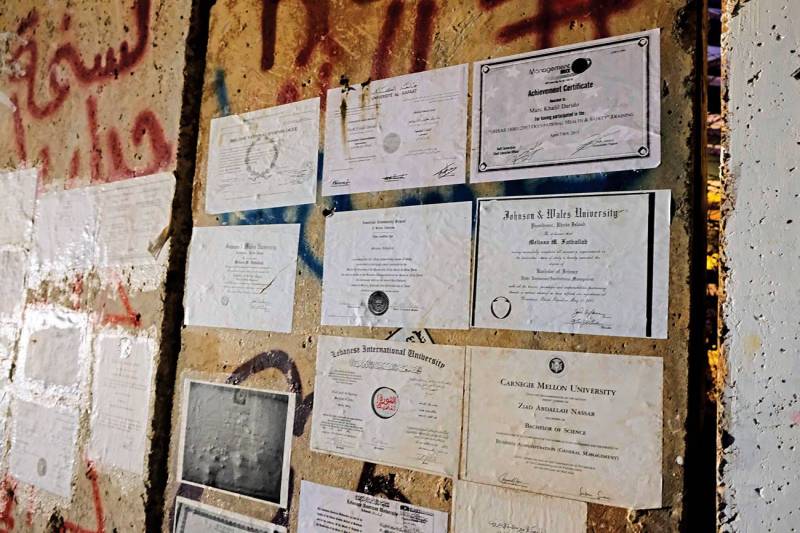