House of Today’s leap of faith

Gilles KHOURY and Zéna ZALZAL | OLJ
In a country struggling to stay afloat, aspiring to “elevate” might sound like an unrealistic dream. But that is exactly why House of Today, a non profit organization supporting Lebanese designers, chose “Elevate, the Quest for Heightened Senses” as the theme for the fourth edition of its design biennale.

"It’s about raising our standards, our ambitions, especially when it comes to our local design being on the international scene, at a time when optimism is missing in Lebanon,” said Cherine Magrabi Tayeb, the founder and director of House of Today. “Now that key players in design and art are interested in our projects, it’s also about building bridges between local and international artists.”

For eight years, House of Today has been working to identify, nurture, mentor, curate, showcase and connect Lebanese product designers with design experts the world over. Its efforts are starting to be noticed.

"After the participation of HoT (House of Today) at Design Miami in December, I was literally dazzled. It made me want to make R & Co part of this edition and this adventure,” said Evan Snyderman, the co-founder of R & Co, an American gallery that is currently one of the most prestigious on the design scene and is participating in this year’s biennale.

The most striking display at the biennale belonged to the duo Ghaith & Jad (first prize winners of the OLJ-SGBL award at the second edition of Génération Orient). Their installation subtly reflected the exhibit’s theme, with interwoven curtains spread on the walls and carpet “islands” rising from the floor. "We wanted to respect the space and its high ceilings, playing between keeping the rawness of the place and giving a warmer touch. Our approach to the concept of elevation was done by placing the pieces on the ground, as they would be in an interior, while raising the carpet like a skin that contains them,” the duo explained.

But the centerpieces of the show were three coffee tables designed by three teams of Lebanese artists, selected by House of Today, who travelled to Paris to team up with three design teams from R & Co. Each table was conceived of and created by a team working in collaboration. The pairs were Carlo and Mary-Lynn Massoud with the Haas Brothers, Flavie Audi and Rogan Gregory, and Sayar & Garibeh with Katie Stout.

The partnership between the wild and free aesthetic of the Haas Brothers’ and the audacity of the siblings Carlo and Mary-Lynn Massoud was sure to lead to an atypical and sexy result. Their straightforward and sensual approach was reflected in their table, called Boob Boobie Dou. The table was made of pink marble in the shape of an inverted breast, with the nipple pointing to the ground, held between two hands of gilded bronze.

The final product reflected a seamless and fun integration of craftsmanship and philosophy stemming from the fact that the designers met in South Africa four years ago and have remained close friends. "Everything was done in a very spontaneous way, says Carlo Massoud. It was very easy, pleasant, childish even. We really wanted this piece to express our friendship. We communicated via Skype and phone. Then we drew the breast. They made the hands. They sent us their drawings in 3D to finalize the model in Beirut. It was in Milan, in Italy, that the hands were cast in lost-wax bronze, that the pink marble was cut and assembled.”

Lebanese artist Flavie Audi was supposed to work with the Rogan Gregory, but the American designer did not participate in the collaboration. Still, Audi managed to produce a noteworthy piece. The uniqueness of her design aesthetic and hybrid approach led to one of the standout creations at the biennale. Called Fluid Encounter, it evokes a geological fragment from a lunar and utopian landscape.

The table stands on legs that appear to be made of rock, and the top is made out of a bronze sheet that is as thin as paper. The bronze was treated with chemicals to make it look aged, hand painted with and covered with an ultra-glossy finish to give it the impression of fluidity. The natural forms in the table reflect the designers interest in artificial geology. The intent was to cause people who see it to question the nature of our daily realities.

Morph, the side table designed by Sayar & Garibeh in collaboration with Katie Stout, an artist and designer based in Brooklyn, was one of the most unique pieces on display. Its legs were made of ceramic, clay and molded brass and looked like a hybrid between animal legs and tree branches.

The piece reflected a new, free and spontaneous direction for the Lebanese design duo. "In this design, we sought to push our limits both in terms of materials and ideas,” Stephanie Sayar and Charbel Garibeh explained. "While our usual method is to progressively clarify our sketches to create smooth geometric shapes, in Morph we have sought to translate our sketch into an object without going through the simplification process.”

The fully handmade table was created partially in Katie Stout’s studio in New York before being finished in Sayar and Garibeh’s studio in Beirut. The collaboration played out through a series of sketch exchanges, messages and video calls. “Each designer brought his own touch and ideas to the initial drawing, all in close collaboration,” Sayar & Garibeh said. The result was clearly influenced by their New York partners playful, unusual and colorful aesthetic. 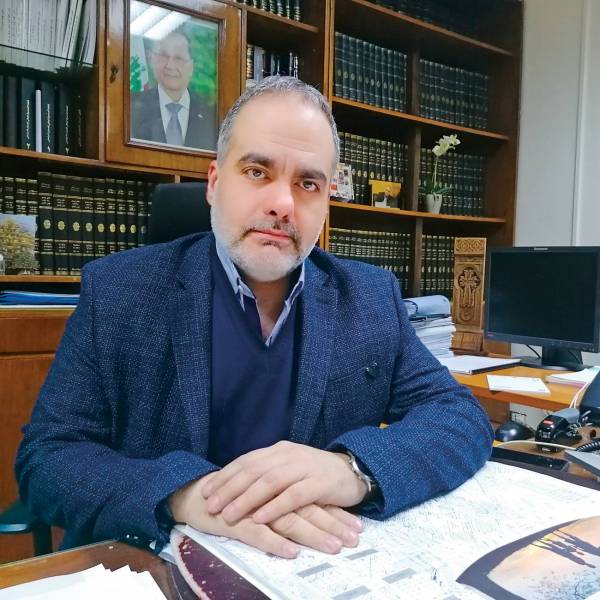